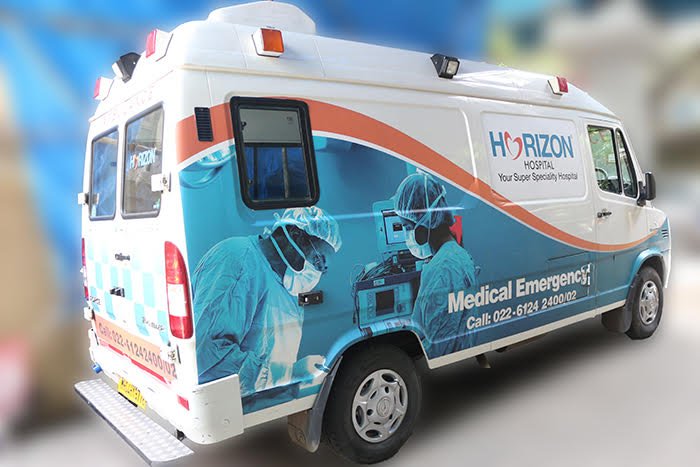 Horizon Prime Hospital has a rapid response service to reach to the patient immediately after call. Treatment is initiated at once & patient can be shifted in the ambulance.

The critical care van with latest state-of-the-art technology is equipped to handle the most complex cases. The emergency medical and rapid response team is well trained to handle critical cases with ease thereby providing the best possible support.

Comprising of two ambulances. One is state-of-the-art advanced care ambulance and other is the basic ambulance.
Cardiac ambulance Services available with all Necessary equipment.
For booking please contact on –

What is Golden hour?
The Golden hour, also known as Golden time, refers to the period of time following a traumatic injury during which there is the highest likelihood that prompt medical and surgical treatment will prevent death.
While initially defined as an hour the exact time period depends on the nature of the injury and can be more than or less than this duration.

What can we do in the Golden Hour for a heart attack patient?
For a heart attack patient, a Golden Hour is a critical time because the heart muscles start to die within 80-90 minutes after the blood flow stops, and within six hours, almost all the affected parts of the heart could get irreversibly damaged.
So, the faster normal blood flow is re-established, the lesser would be the damage to the heart.

How important is it for angioplasty to be done in the Golden Hour?
The earlier blood supply is re-established, the lesser would be the damage to the heart, and so, lesser the chance of death and of functional disability.
Thus, it is very important to get to an emergency department quickly – within the Golden Hour – if one has reason to suspect that he/she is experiencing a heart attack.